The "Pilgrim Baptist Church" records it's beginning in 1868. Before the Civil War, the slaves of the community worshipped with the white congregation of the Clear Spring Baptist. The slaves were allowed to sit in a section of Clear Spring. Later, after the slaves were freed, the former slaves set out to have their own church. Some of the white citizens came to their aid and helped the blacks to establish a place of worship.

Clayton Kilgore, a former slave owner, who was a member of the Clear Spring Church, was instrumental in helping to build a church for the freed slaves. Mr. Kilgore had begun a school for the slaves on his plantation before the Civil War. He taught them to read and write and continued to teach them educationally plus religiously. A Sunday School grew out of 'day school.' From the small Sunday School, a movement to construct a Negro Baptist Church was initiated. Mr. Kilgore realized the necessity of a tract of land and donated 10 acres to the blacks to build the church.

Under the leadership of Rev. Wesley Gaines and his brother, Rev George Gains, two black gentlemen from Philadelphia, who had been ordained in to the Ministry by Clear Spring Baptist Church, a church building was constructed. On July 20, 1868, at which time the church was officially completed, the first service was held. The church was called "Pilgrim Baptist Church" and Clear Spring became the ' mother church.' The eleven black members of the Clear Spring Church were given a letter in part that read, " stating the names of the black members in good and regular standing with the Church at that time and at their request are dismissed to join another church of the same faith and order." The charter members were: John Abraham, Adam Ware, Eliza Do, Frances Ware, James Valentine, Elizabeth Clark, Charles Cook, Johnson Kilgore, Charlotte Abraham, Nancy Abraham and Clara Drummond. Rev John Abraham became Pilgrim's first pastor.

In 1894, while Rev. Thomas Jones was pastor, there was controversy and the church was reorganized. The dissenting members formed another church. From 1894, Old Pilgrim Church has always been on its original church site. During the next four decades, many persons grew to know God and received salvation. Many outstanding pastors followed during the years. Among the distinguished pastors were: Reverends J. Kilgore, Milton Ware, T.M. McElrath, W.P. Jones, C.W. Webb, G.B. Hancock, W.A. Bannon, A.R. Burk, B.F. Calvin, J.C. Cowans, J.H. Gilmore, and H.D. Steward. As the community continued to grow, the membership increased. By 1907, with Rev. H.D. Steward as pastor, a new wooden structure was erected. The Rev. J.W. Mathis served as pastor from 1937 through 1954. A young preacher by the name of S.C. Cureton then took over the pastorate and served from 1954 through 1957. Rev. Ulysees S.G. Sweeney became pastor for the next 23 years - from 1957 through 1979. Pilgrim's church building began showing the years and was remodeled in 1962, during Rev. Sweenye's tenure. The wooden frame was enclosed with bricks and four educational rooms were added.

With the untimely death of Rev. Sweeney in 1979, a new pastor was elected, the Rev. Henry Dawkins, who was pastor from 1980 - 1984. Rev. Dawkins and many church members had the vision of a new church edifice. Groundbreaking ceremonies were held in June 1982 for the present edifice and fellowship hall. Through blood, sweat, tears, labor, sacrifice and spiritual influence, we are able to share services and fellowship in our present facility.

After Rev. Dawkins' tenure came Rev. D.E. Dennis. The late Rev. Dennis was pastor from 1985 through 1993. The church congregation grew enormously during Rev. Dennis' pastorship. Many structural improvements were made including installing new carpet, repaving the parking lot and an adding an audio tape system.

The late Dr. Fidi R. Giles rendered service from 1994 - 2001. During Dr. Giles seven and a half years, a prison ministry started and a community outreach program was initiated. Dr. Giles stated that because Old Pilgrim had always been involved in missionary work, the church should rightfully be named as such. The church officially added "Missionary" to its name and became Old Missionary Baptist Church. The church mortgage was paid in full during Dr. Giles tenure. This was in part due to his motto: "Go, Go, Do, Do." 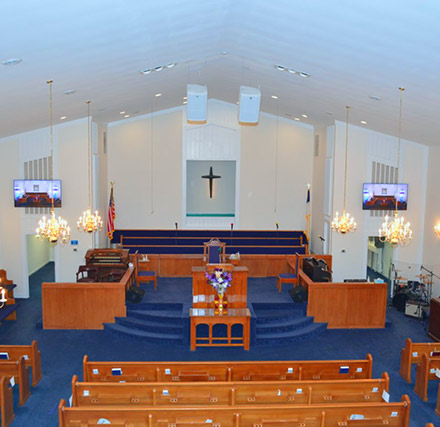 Rev. Les Howard became Pilgrim's pastor in December 2010. He delivered God's word through his unique teaching and preaching style. Our Theme: "A Community Church with a Christ Centered Message", our Vision Statement: To fully develop disciples for kingdom building, and our Mission Statement: To teach, train, and transform lives becoming the disciples God has called us to be, were all adopted during Rev. Howard's tenure. Rev. Howard accepted a church closer to his North Carolina home and departed in August of 2012.

Rev. Allen Davis stepped up to the podium preaching God's word and became our interim pastor in September 2012. Rev. Davis is a genuine and caring person who wants the best for the Pilgrim Church family. He gives of his talent and time to minister to all people. Rev. Davis continues to work closely with deacons, trustees and the congregation for the betterment of Old Pilgrim Missionary Baptist Church.

In November 2013 Old Pilgrim was blessed in receiving Rev. Terry W. Norman as pastor. Rev. Norman a gifted inspiration acknowledged the desires of his heart for growth; to carry out the completion of a Life Center. Standing on the Word of God as a compassionate leader Rev. Norman is committed to his calling to develop disciples for kingdom building, to preach, teach, to train and transform lives.

It is through workshops, teaching, training, preaching and weekly Bible sessions that the Old Pilgrim Church family is celebrating 145 years of spiritual growth.